Synthesia is a game that can help you learn how to play the piano using falling notes.

Synthesia lowers the barrier to entry for beginners. You can get started immediately without knowing how to read sheet music. Playing songs right away provides great motivation to stick with the piano where you can learn traditional sheet music notation over time as you go along, should you choose to.

Synthesia is also great for more experienced players. It's a nice platform for quickly sight-reading a new piece, and nearly any song can be found in the MIDI or MusicXML formats that Synthesia understands. Synthesia is also a nice companion tool for daily practice to complement piano lessons. The scoring and progression systems help keep track of personal growth on each piece.

Watch the notes fall and follow along.  Or, connect a piano and join in the fun. 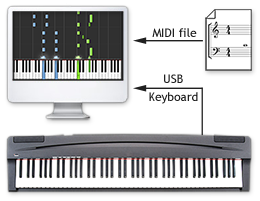 Synthesia shows each song as a series of falling notes or sheet music so you can follow along easily.

If you connect a musical keyboard (using USB or MIDI), Synthesia listens to your playing and helps you learn any song.

Don't have a digital piano? Check out some that we recommend.

Synthesia Can Play Any Song

We chose open, industry standard file formats that have been around forever because every music editing app can load and export them. We wanted as few roadblocks between you and your favorite music as possible.

Check out the Synthesia Music Store for the highest quality MIDI songs.

Finding high-quality songs in MIDI format can be challenging. So we decided to help solve the problem by creating full MIDI arrangements of your favorite songs.

Our goal is to give you the highest quality version of each song, at a super reasonable price. All songs are fully licensed by the original publisher for digital download. New songs are added often, so be sure to check back regularly!

Any PC or Mac made in the last 10 years

The only requirement is graphics hardware that supports the OpenGL 2.0 standard (released in 2004).

An iPad running iOS 9.3 or later

Original iPad 1 users can still download an older version of Synthesia by following these instructions.

Synthesia is best experienced on a tablet-sized device.

A compatible Chromebook with access to the Google Play app store

Google maintains a list of Chromebooks that can install Android apps from Google Play. Be sure to update your Chromebook to ChromeOS 65 or later to get support for connecting MIDI devices via USB.

Synthesia continues to evolve into the best practice tool for beginners and experienced players alike.

2006
The project is introduced as "Piano Hero". It doesn't support musical keyboards yet and the site runs on donations.
2007
Requests for a Mac version prompt a donation drive to help us get Mac development hardware. A couple of articles help accomplish the goal on the first day!

Activision requests the name be changed to avoid confusion with Guitar Hero. A name contest is held. The name "Synthesia" wins.

The Mac version is released and the project is renamed to Synthesia at the same time.

2008
Persistent requests for a sheet music view prompt the creation of the Learning Pack: a paid upgrade that will include educational features and grow over time. Learning Pack sales replace the donation-based model.
2009
Synthesia continues to grow rapidly and add new features to both the free download and Learning Pack.
2010
In addition to regular releases, Synthesia is featured on the UK television show Strictly Come Dancing.
2011
Synthesia becomes the most popular way to produce piano tutorial videos online.
2012
Features are added to help educators use Synthesia as a teaching platform and create content more easily.

Synthesia makes its debut on the iPad.

2014
Custom hand assignments, dozens of major improvements, and new languages make for the largest update Synthesia has seen to date.

Synthesia is released for Android tablets, which means it's now available in more places than it's not.

2015
A series of How-to Guides are added to help users discover all of Synthesia's powerful features.

More than 50 convenience improvements and fixes are added to make Synthesia friendlier and easier to use than ever.

2017
Synthesia continues to support new technologies like Windows 10 Bluetooth MIDI and the key lights on The ONE Smart Keyboard.
2018
Synthesia expands its platform support to compatible Chromebooks, making it much more widely available in classrooms around the world.
2021
After many years of being the most popular feature request, song recording makes its way to Synthesia via the simple, multi-track recorder.