Page 1 of 2
by Nicholas
PREVIEW r1256
Download from the pink box above.

Known issues: Once those two are taken care of (along with anything else you guys find) and I get finger hints in for the 6 demo songs along with the entire G Major set, this is 0.8.1.

Finger Hints: I need your help!
Finger hints should be made available for everyone for the built-in songs! You can help starting with this preview! Here's how: My hope is to get the final 0.8.1 release out in the next couple days, so only sign up to help if you'll be able to finish soon.

by Pianotehead
I'll take 3 - Hard. I'm feeling very capable now! That is if noone has claimed that group, then I can just as well take any other.
by Lemo
Well can't help you guys on that fingering stuff, but I just noticed I'm having a small display bug when launching Synthesia in windowed mode
That only happens with those dev releases, that's why I'm posting here.
I remember seeing somewhere you wanted to remove the always on top thingie, and it's indeed better now, but I'm getting a
"ghost" window frame now. If I move the window around, the frame goes back to place, and I can "erase" the ghost one by
moving a window over it (aka refreshing the screen)
Here is the snapshot:
Spoiler: 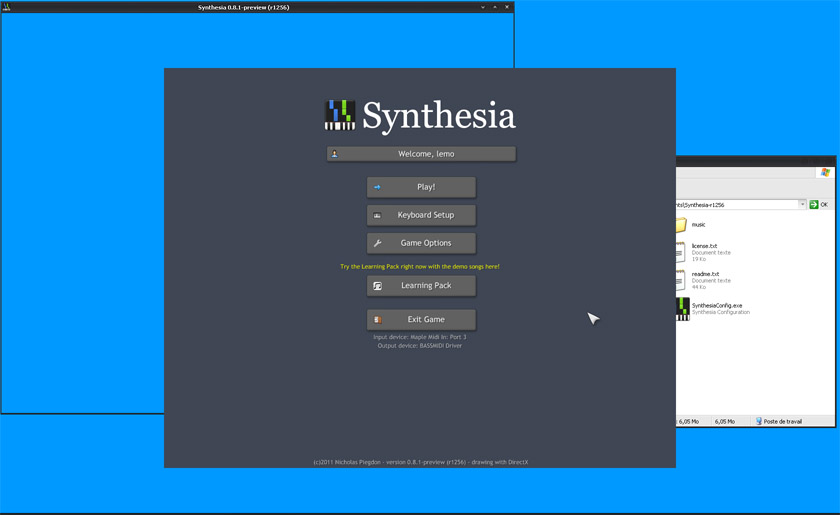 But I already need some advice. “A Mighty Fortress is Our God” midi does not match the sheet music on http://www.gmajormusictheory.org/Freebi ... bies2.html unless I am just off my nut. Let me state again that I have no musical training at all so forgive my weak terminology. To start with the measures start out of sync because of a missing upbeat at the start. Ignoring that, the fourth measure on the sheet has a quarter C note that is missing in the midi, and I want to put a 3 on it. In the eighth measure I believe that the D in the midi is a half instead of a quarter D and a quarter F# as on the sheet music. Another missing C on measure 9 and so forth.

Can a more qualified musician verify my findings? Should I correct the midi to match the sheet music, quantize and then finger it? Or leave the midis that I have questions about for a more qualified musician to recommend fingerings? Should we start another topic specifically for this venture to keep this one dedicated to preview bugs and observations? What do they call that blue stuff that barbers put combs in?

Lemo wrote:That only happens with those dev releases...

That makes it sound like it's been happening for more than just this one? Uh oh. hehe.

To narrow it down, if all of you guys that are experiencing it could answer the following:
by Pianotehead
I noticed the missing notes with A Mighty Fortress Is Our God. I didn't see there was a missing C in the fourth measure, but the E in the bass clef, same measure, is not in the MIDI. Neither is the F in the fifth measure. An F# in the eight measure according to the sheet is dropped in the MIDI, again an E in measure 9, and an F in the tenth.

The next wrong measure is the 14th, bass clef. F in sheet, D in MIDI. There are more errors, but I'm gonna stop listing them now!

I'm probably not a more qualified musician than TieDyeGuy, but I think the reason the sheet music is out of sync with the MIDI is that there's seems to be no way that MIDIS can tackle pickup notes. The same problem comes up with Auprès de ma Blonde in 3 - hard, but then the pickup notes become whole notes in the MIDI instead of quarter notes in the PDF file.

I believe we should just skip numbering the wrong notes and ask Gilbert de Benedetti to correct the files (we don't know if the sheet or the MIDI are wrong.)
by Lemo

Nicholas wrote:That makes it sound like it's been happening for more than just this one?

Yeah I just picked the "dev" train, enough to see that the previous one (1242) was having that issue too.

Nicholas wrote: To narrow it down,

I hadn’t noticed it until Piantehead and Lemo mentioned it, but I may have always been on Open GL until recently.

All on an XP Pro Dell Optiplex GX620


Pianotehead wrote: I didn't see there was a missing C in the fourth measure, but the E in the bass clef
I believe we should just skip numbering the wrong notes and ask Gilbert de Benedetti to correct the files (we don't know if the sheet or the MIDI are wrong.)

I have never felt more confident that I will be able to learn to actually play piano. I have been stalling any serious efforts in anticipation of this day. Now I have to travel across the country for a conference and won’t really get to play for a week and it is killing me. So I am using the time I have before I leave to add fingering to all of my other midis. It is just a shame that I cannot share that work with others due to copyrights. But you have made it easy enough that any work I do will be no trouble for others to reproduce.

TieDyeGuy wrote:It is just a shame that I cannot share that work with others due to copyrights.