The first Synthesia for Android beta is available! Anyone with an Android (3.1 or later) tablet can participate.

Here's how: Join the Synthesia for Android Beta


UPDATE JULY-2015: Google made this process MUCH easier. (It's just the link above.) Expand the spoiler to see how much work it used to be.
Spoiler:
From your Android tablet, visit the Synthesia for Android Beta Google+ community. (Joining a Google+ community is how Google keeps track of access to beta apps.)

If prompted, use the Google+ app. (Chrome doesn't show the community's links.) 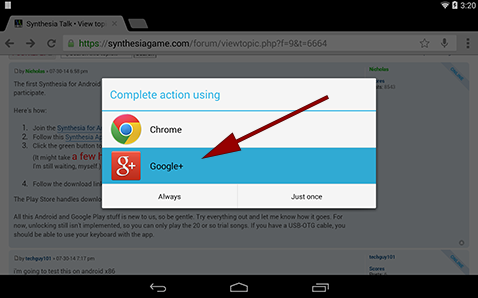 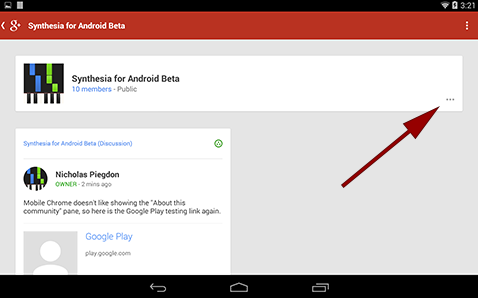 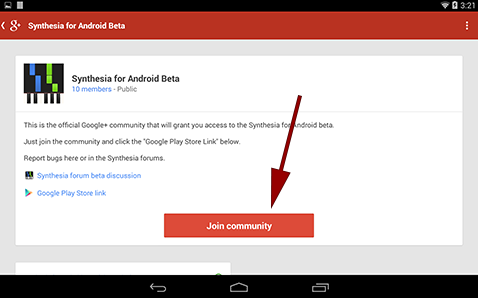 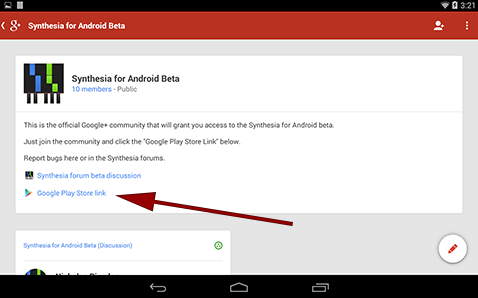 Tap the "Become a Tester" link. 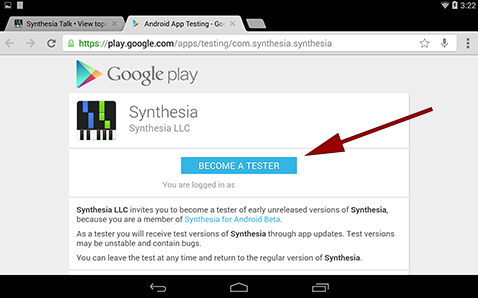 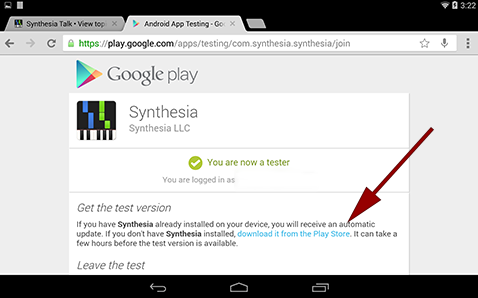 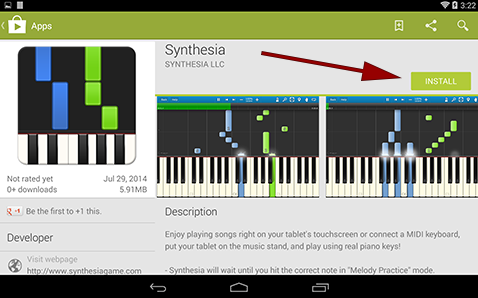 ... and accept the beta's permissions. 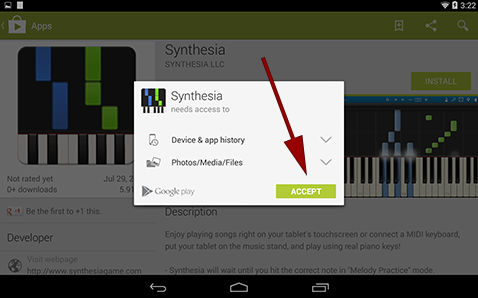 From that point on, the Google Play Store should handle downloading new beta builds automatically.
All this Android and Google Play stuff is new to us, so be gentle. Try everything out and let me know how it goes. For now, unlocking still isn't implemented, so you can only play the 20 or so trial songs. If you have a USB-OTG cable, you should be able to use your keyboard with the app.
Top

i'm going to test this on android x86
Top

Er... there is a (really good) chance it's not going to work. I think the build is ARM-only for now. Are there a lot of x86 Android tablets out there? I didn't even have x86 on our radar.
Top

i think it has a arm translator.
Top

The Synthesia download probably isn't set up quite right.

I first tried opening the Chrome browser on my Nexus 7 and following the links from this Forum. I found the Google+ Synthesia community and, if I remember correctly, I was able to join the community. But I could go no further. I did not see the link to the Google Play Store.

I then used the Google+ app on the Nexus and I was able to see the link to the Google Play Store but it didn't work. I think it was here that I was able sign up as a tester.

Then I logged into Google+ using Firefox on my PC and I was able to get to the Google Play Store. I selected Install and selected my Nexus 7 as the device to install on. Maybe 5 minutes later Synthesia was installed on the Nexus 7.

Sorry I don't have a better picture of what happened where. I don't think the several hours to download is the way it should be. My procedure doesn't seem rational either. I suspect some small tweaks are needed to allow a straightforward download using only the Android.

My suggestion would be to start by trying to figure out why the Google Play Store link doesn't work from the Nexus 7 Google+ app. If it did, I think the Google+ app would have provided a straightforward download procedure.

My first impression of Synthesia for Android was that it works as expected. I do have a USB-OTG cable so I will try this with my keyboard in the next few days.
Jim Henry
Author of the Miditzer, a free virtual theatre pipe organ
http://www.Miditzer.org/
Top

I can't access to Google store with my tablet.

do you plan to distribute finale Android's version of Synthesia on other stores ?

will it be free for synthesia's users ?

Glad to see that first beta!

I don't have an USB OTG cable to test with my keyboard however...

Can't wait for the unlockable version !

oooh this is great news, do you know what kind of cable I need to connect a Yamaha DGX-630 to a Galaxy Tab 10.1?
Top

I was a little suspicious about that myself. I'll polish that experience up a bit later today. I'm going to add some pictures to the top post to help point out all the steps, too.

EDIT: Added. Hopefully that should lead everyone in the right direction. You were right that Chrome wasn't showing the links. The Google+ app seems to though.


revilo2 wrote:do you plan to distribute finale Android's version of Synthesia on other stores ?

Which stores did you have in mind? Kindle Fire is going to be tricky because they don't allow apps to talk to USB devices at all. So Synthesia would have to be touch-screen only for now. For that reason, today we're focusing on Google Play and will try to work out a solution for Kindle later.

This is also something I've been trying to nail down for a while now. I'm starting to lean closer to the iPad model, where it's a separate unlock, but a low-cost one. That keeps it easy to understand, super-convenient to do the unlock on the device in a single tap, and you don't have to worry about hauling codes around. As Synthesia proliferates to the other storefronts (Steam, Windows Store, Mac App Store, etc.), the single-click unlock is a powerful device that I want to embrace.

So at the moment, my expectation is that unlocking the Android version will be a Google Play in-app purchase for something around $9. As per usual for app stores, it will work on all your Android devices and is good forever.


advalencia wrote:do you know what kind of cable I need to connect a Yamaha DGX-630 to a Galaxy Tab 10.1?

I haven't updated the Keyboards page for Android yet, but it should be pretty similar to the PC or Mac option + a special USB-OTG ("On the Go") cable like this one.

For your DGX-630 (which has USB), all you need beyond the OTG cable is a plain USB printer-style cable. (That is, an "A to B" cable.)
Top

Well i tried to run synthesia on android x86 hears what happened:

half of the image was messed up

thats all i can say right now.
Top

Oh! It's not even a tablet! Interesting. Is that a custom setup or does someone sell a laptop with Android pre-installed? Hopefully it at least has a touchscreen.

For now, I'm going to have to call x86 unsupported just because I don't have a great way to test it. Though, after looking into the subject, Atom-based x86 Android tablets do seem like a new thing that's starting to accelerate. We may look in that direction in the future.
Top

and hears the specs:

Nicholas wrote:Er... there is a (really good) chance it's not going to work. I think the build is ARM-only for now. Are there a lot of x86 Android tablets out there? I didn't even have x86 on our radar.

Don't know if there's a lot but at least ASUS releases Atom based tablets, which are x86 (and I unfortunately have one). I believe most of their MemoPad line is Atom. I know HP has also released at least one.
Top

I got to the google store page fine but can't install it, it says 'this app is incompatible with your device'. I suspect it thinks my tablet is a mobile (it's sortof both).

Your Fonepad's screen should be big enough. Looking at its specs though, I think the reason is because it's got an Intel processor. That makes it an x86 Android tablet instead of an ARM Android tablet. I'm starting to get the impression there are a lot more x86 tablets out there than I realized. (Two days ago I thought there were zero out there, so I suppose that is true by default.)

Out of curiosity, if you try to play a MIDI file (like this one) on your tablet, does the audio play correctly through the default music player? The reason I ask is that Android's MIDI synth appears to be written in hand-optimized ARM assembly and to the best of my knowledge there isn't an x86 version. Although, Intel seems to be claiming real-time ARM-to-x86 translation with "unnoticeable performance impact for most applications", so maybe it will work. Of course, that same statement makes you wonder why Synthesia doesn't work out of the box. Hmm.
Top

Thanks for checking! That means there is hope.

So, the good news is that we just decided if this much x86 feedback has arrived in just the first 24 hours of the beta, there's a good chance it's something we need to support officially. I just ordered a pair of Atom Android tablets so we can work on that. The next build (or maybe the one after that) should work on everyone's tablet.
Top

It is difficult to tap buttons in the top bar without also tapping the progress bar on a Nexus 7. Is there a way to figure out what is closest to the center of a touch and only touch that one item?

The pop-up Home, Back, Open Apps bar at the bottom of the on-screen keys is an annoyance.
Jim Henry
Author of the Miditzer, a free virtual theatre pipe organ
http://www.Miditzer.org/
Top

jimhenry wrote:Is there a way to figure out what is closest to the center of a touch and only touch that one item?

Not that I know of.