by Lemo
Hey guys.
Lately I've been searching for a minimalist MIDI player I could quickly use to check what I'm downloading.
Most of the time, I simply use winamp, but I can't really see how the midi file looks like, how many tracks it's split into, the number of notes, or how it's going to play inside Synthesia.
The only solution is to launch a full MIDI program that will take a while to start, or to play the file inside the game.

So how about...
-Synthesia Midi Player- 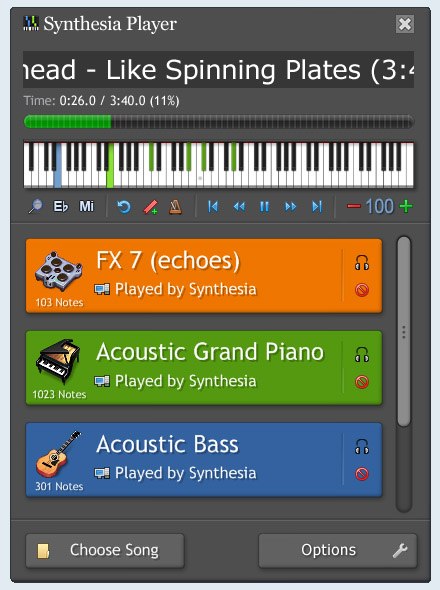 Basically it would reuse the core functions of the software, in a minimal way. MIDI files are associated to that player, so that it launches instantly when double-clicking one.
You can see the full list of tracks as they appear in the game, and mute or solo each one. Also, the option box let you configure the output, so you can play the file through
your external VST. The '+' and '-' signs are here to change the volume instead of speed, along with the regular controls.

Midi hunting being one the the greatest side-hobby of Synthesia users, I think it would be nice to have something like that.

by aria1121
That's pretty cool, I've to say.
Avtually I requested something like this a time age (can't remember that good) but it was something like the combination of Synthesia and Windows Media Player. Nicholas refused.

But if you want to start Synthesia quickly, you can set *.mid;*.midi;*.kar standard-to-play to Synthesia. It'll start at the track-selection screen, so you can see what for tracks play, and just hitting [Enter] will start playing it. Is the song worth enough to keep? Keep it. But is it junk? [Alt]+[F4] and [Del] song.

As alternative you can use WMP or Anvil Studio, or a small(-DOS)-based program that runs instantly from a script.
Lets hear Nicholas' opinion.

by Lemo
Thanks for the tip, I didn't notice you could simply open a midi directly into synthesia,
works quite fine to check a few files

However I still like the idea of having a compact window you could let around while "hunting", for example just drag n' droppin files into it.
Also, with this layout, you don't have to open/close synthesia fullscreen for each file, and you can change the track settings while playing,
without going back to the menu.

Anyway, consider that as a secondary suggestion, of course it's not as important as the "playable" features

This would be something that could be used for the iphone.

by swalker133
I like the idea of having a mini keyboard demo the parts you have set to "Played by You" from the track selection screen...

by DC64
Maby the distance between the keyboard and the instruments can be adusted to show the falling notes.

by kiwi
Hi lemo it's awesome but there's no download links?
By the way Van basko karaoke player do the job for to visualise notes on a keyboard or mute solo them and make playlist.
U can check it here:
http://www.vanbasco.com/

by Lemo
Thanks kiwi
Here is the download link

Actually I installed that Vanbasco player recently, and it's quite neat indeed for some purposes.
However their window layout is rather annoying, and it lacks some features I really wanted, like the number of notes for each tracks.

But if you want to check the non-photoshop-mockup version, I'm currently adding most of these functions into Gramp,
which was originally meant as a random player for local files. Now I trying to compile several ideas into this single program thingie.

by kiwi
I know i hate too softwares with multi windows but Vanbasko is skinnable so u can make a skin with only one window (well there's a snap for all the windows and the size of each can be changed long time ago i had maid a skin with a big keyboard and all the windows fit in perfectly.
Anyway i think i 'll use you're soft now

About Vanbasco, even if the windows fit and snap together, the secondary panels won't follow the main window as you move it
(unlike Winamp) and this is annoying too :p

by DC64
Where is the download?
(little slow right now)

by Lemo
What, really?
For the third time there is no download here
This is a mockup, it's a suggestion, it's not real, a simulation, an image...

by aria1121
@Lemo
lol then you should move GRaMP to the General section.

by Lemo
Apparently everyone else (TonE, Frost,...) have posted their tools in the Feature request.
As the label says "Synthesia is a living project. You can help by sharing your ideas. ", and that's what I'm doing

.
I guess the idea is the demonstrate how a feature could work in our programs, before those ideas get eventually included in Synthesia in a more clean an integrated way.

I try to make things that don't have to do much with Synthesia but make the work around it way easier and fun (well you maybe too).
But still, why shoud you change the resources as it isn't possible to change the real GUI because you can't change the code for the appearance'ing lay-out?

by Lemo
Resources? Are you talking about this topic or about the skin thing?

Lemo wrote:What, really?
For the third time there is no download here
This is a mockup, it's a suggestion, it's not real, a simulation, an image...

So the only things for now for to have these features is Van basko but there's another one with only one window it's an old programm but i can't retrieve the name.
There's also:
http://aitech.ac.jp/~ckelly/midi/help/midi-players.html
Many one here.
All times are UTC-05:00
Page 1 of 1
Powered by phpBB® Forum Software © phpBB Limited
https://www.phpbb.com/