No explicit, hateful, or hurtful language. Nothing illegal.
Post Reply
5 posts • Page 1 of 1

I like webradios because they continually bring you varied stuff to listen, and new music to discover.
These days I'm pretty much into classic/soundtracks webradios, looking for additional pieces to play in Synthesia.
Maybe someday we shall make a nice list of channels on that forum, because the "webradio" search didn't return any result at all here :p

I'm also finally considering the possibilities of the old, but still very cool Midi format.
It's kinda weird because every time you want to search about midi, you mostly end up with 90's websites with crazy graphics, and a very few information from the 2010 era...
Also, while I'm at it, we shouldn't forget GIF animations because of nasty flash crap, I mean they're still freakin' fresh too

Anyway, to get back to the main subject, what would be cool is a Synthesia Webradio streaming pure midi.
For example I'm using Winamp for webradios, which is also my usual player for midi files.
Recently I noticed you could configure winamp output to play the midi directly into a piano VSTi, or whatever you like.
Just go to Options > Preferences > Plug-ins > Input > Nullsoft Midi Player > Configure and choose your device there 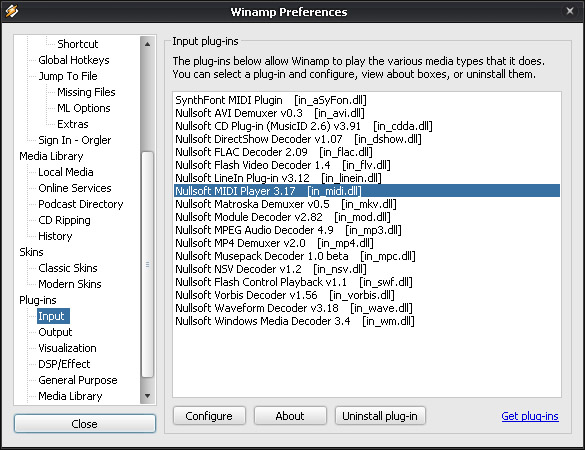 Streaming midi though winamp into a VSTi we would have great sound quality, and almost no bandwidth costs!
They have a well know winamp plugin for streaming, but unfortunately it's not working with midi.
I've been searching for some way to actually stream midi, but most of the available technologies seems to support only mp3 or aac kind of stuff.
Because midis are so small, you may just won't have to cut them into blocks, and simply stream them one by one to the user...

To receive the webradio, you could have several options:
-First would be to write a plugin for Winamp or another player to enable midi streaming, or "fake" song by song streaming.
-You could also build that feature into the totally cool Synthesia Player I suggested.
-Once the webradio is running and accessible though a simple player, to next step would be to be able to catch the stream inside Synthesia, for everyone to play the songs Live as they're broadcasted

Are all of those midi outputs that you can use in Synthesia?
"And now for something completely different."
Top

No, those are inputs for winamp. (So it can play mp3s midis etc..)
Top

Cool.
"And now for something completely different."
Top

Raymond wrote:those are inputs for winamp

Yup. For clarity I'll just add the capture of what you get when you hit the configure button on that previous image. 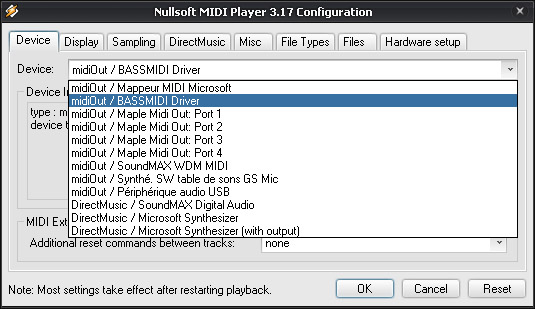 The Bassmidi driver is by the way a very handy solution to get rather nice sound quickly, and directly into Winamp (or Synthesia).

About the webradio itself, for the moment I'll just copy paste some link I saw this week, and maybe I'll get back to it later.

Also, I'm posting in the feature suggestions, but a webradio can be made by anyone of course, after we find a compatible client software solution, there's only one server needed (so it doesn't have to be synthesia's) and a bit of php to roll midi files in a prepared folder
Stuff & experiments for Synthesia: Gramp v0.2 • Skinbox • FireSynth • Video • Webradio
Top
Post Reply
5 posts • Page 1 of 1