Following the "fun" I had extracting resources for Gramp, I thought I'll explore Synthesia.exe a bit further.
So here is a quick Skin editor for Synthesia!
It relies on ResHacker, which (as the name says) is a tool to modify resources bundled in an executable file.

With ResHack you can modify the graphics included in Synthesia.exe, just open it and choose "Replace resource".
Because you have to do it one by one for every single item (122 images in our case), I made a quick script that scans the content of a folder and send it to ResHack through command line.
Just group all the files and drop the folder into the box 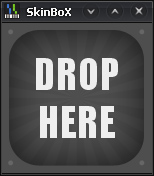 A skin should then be a folder including the modified graphics resources with their exact names.
The original files are tga, but png, tif, and gif seem to work just as fine.
I'm including a test skin inside the archive, so you can have all those names, and an idea of what can be tweaked for the moment.
That includes:
-interface and instruments icons
-notes and keys
-time, difficulty and rating sliders
-particle effects
-cursor 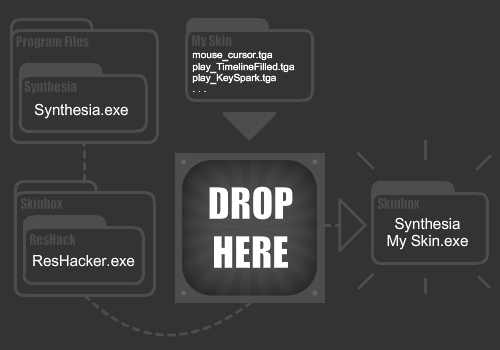 My test skin is an overlay of a black and white checker over the original icons.
Try and drop the Test Skin folder into the box.
What you may change appears in the following shots: 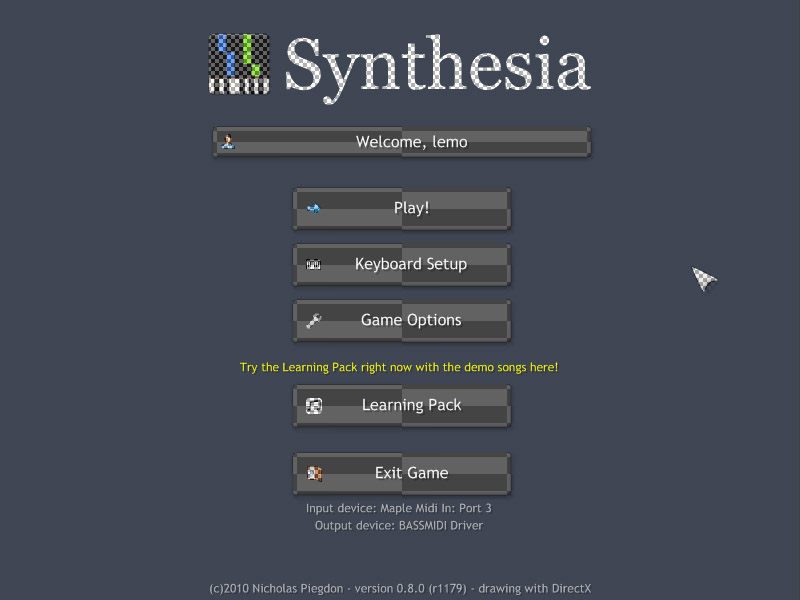 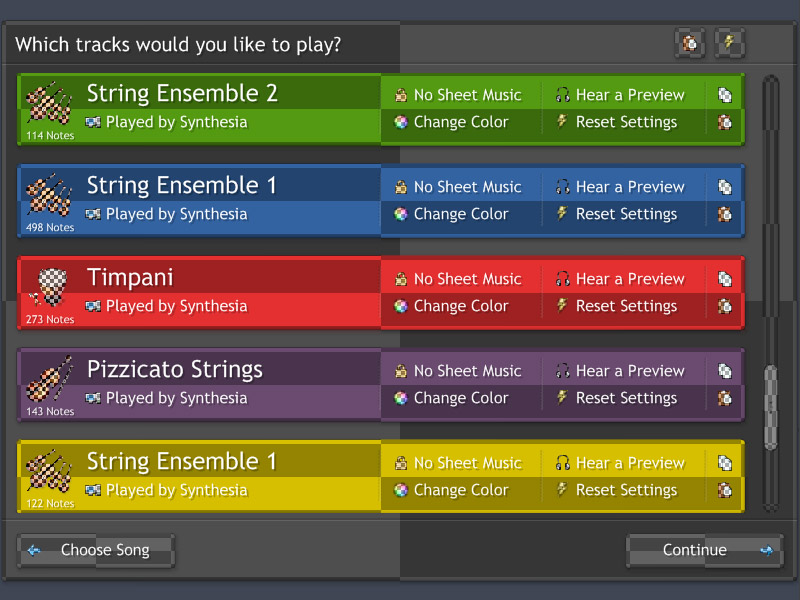 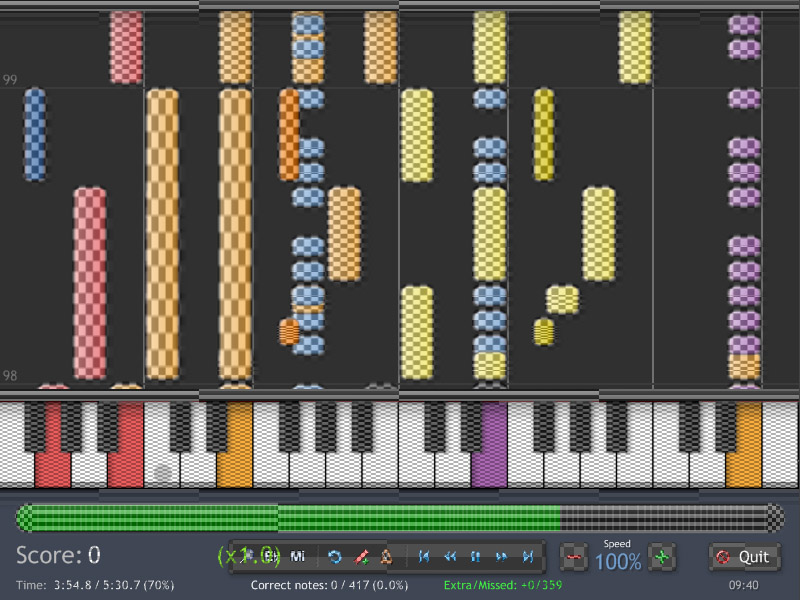 As you can see there is a bunch of checker stuff there, but there is still a lot of things you cannot change, or that you can change in a limited way.
For example have a look at the stretching happening on the notes before thinking about funky patterns covering them.
Also you'll notice there is only one image for all the keys, so you won't be able to create effects like shadows or old dirty keys.
(as you would if there was a full octave and 7 images for the keys)

As it been mentioned in other topics, it would be nice to have more control over different things. I also like that idea of a custom background
to have a real personality for a skin.
You may also vote for Display Style Editor at the features voting page.
For the record, I actually like the current minimalist design quite much, but on the other hand I'm kinda interested of what others may come up with :]

Here is the download below.
You have to get ResHacker separately, as the guy doesn't authorize any distribution.
Once you have the skinbox folder, extract the files (directly, no subfolder) from ResHack to the corresponding folder.
Now go make some skins and have fun :]

Lemo wrote:Now go make some skins and have fun :]

This is cool, and I encourage it. But, let me throw in a disclaimer that since skin support is totally unofficial right now, those resources (size, shapes, number, which ones are used for what) may change at a moment's notice.

Yea I sorta consider this as a experiment, before the release of some real skin support in Synthesia

Possible tweaks are rather limited now, so I guess it won't be hard to adapt if anything have to change in the future
Anyway, if you really want to modify things later, here are some random ideas:
-seven keys instead of one, for variations or shadow effects (like this)
-repetitive pattern for notes without scaling (like the way the blue bar on top of the forum scales, but with a much larger pattern than that this)
-background images, or even just a skinnable place-holder (I think an abstract one could fit quite well, like some of those, but in a totally more subtle piano version :p)
Stuff & experiments for Synthesia: Gramp v0.2 • Skinbox • FireSynth • Video • Webradio
Top

Lemo, you are on the top with your programs, good job.
If this is completly capable, then this could be in a close version.
Would the customization apply to all aspects of design except logo or only certian ones?
"And now for something completely different."
Top

Here is a Slim Edition skin for Synthesia 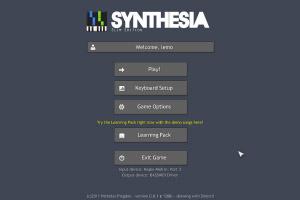 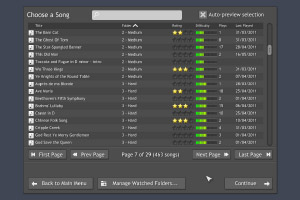 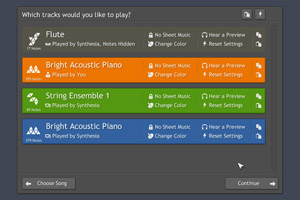 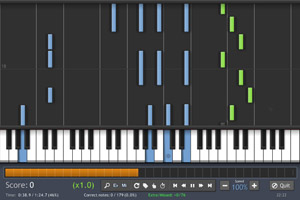 As the title says, this skin is mainly about trimming some of the round borders of Synthesia, to make it looks a bit less like a game and a bit more like a music program.
Some of the changes are really subtle, some are not. The folder contains 74 images (mostly new icons), while current version of Synthesia has 122.
To get the skinned executable, download Skinbox above (and ResHack), drop the folder into the box and you're done!

I was rather subtle on this one, but keep in mind you can also do crazy stuff if you like 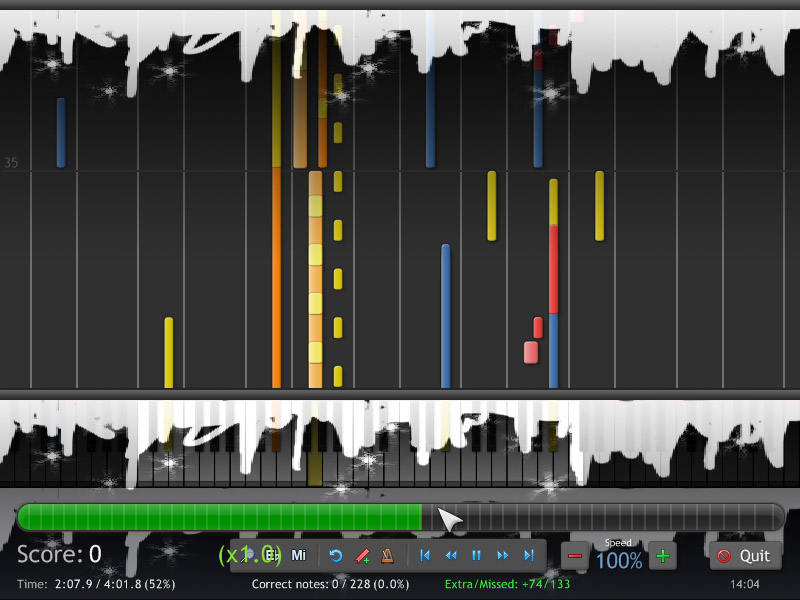 How do I reverse it to standard?
Also see Synthesia DOS Configuration Utility • GetSF2 • AltSynn • SynthesiaMode for Windows • Use microphone as MIDI I/O • MIDIs in DOS
Other topics Synthesia on Linux • How to ask questions the better way - Make your own MIDI - Everything about MIDI copyright
Top

Lemo wrote:... but keep in mind you can also do crazy stuff if you like

XD
I hope it doesn't mean you'll wait christmas to release it :p

i like the slim skin!
I think i 'll go to skinning too

Edit: i have put skin box exe in the same directorie of synthesia i have put ressources hacker in the appropried folder (without subfolders)
But when i drag the slim folder it's wrote synthesia wasn't found

Ah I thought you may come here one day, after those skin stuff with Vanbasco

Well apparently, you're rather unlucky with my tools (or more likely it's me that need to develop correctly :p)
I didn't want anything else than a lil box, so for the moment there is nothing to configure anywhere
Did you install Synthesia in a custom location?
By default, Skinbox will search for Program Files > Synthesia > Synthesia.exe
I suppose I'll add a small config file next time...till then you can try to copy Synthesia.exe there if the folder doesn't exist
Stuff & experiments for Synthesia: Gramp v0.2 • Skinbox • FireSynth • Video • Webradio
Top

Okay forget the last line of my previous post
I uploaded Skinbox v0.2, with checks for Synthesia and Reshack
A standard file selection window will popup to let you specify your install folder

So would it be a "no no" if we use icons from other places that give them out "freely" or found on google?
Or if 'person' is to give them out to 'person 2' ?
"And now for something completely different."
Top

License permitting, you can use any icons you like. If it's public domain or something like Creative Commons, you should be all set.
Top

Lemo wrote:Ah I thought you may come here one day, after those skin stuff with Vanbasco

Well apparently, you're rather unlucky with my tools (or more likely it's me that need to develop correctly :p)
I didn't want anything else than a lil box, so for the moment there is nothing to configure anywhere
Did you install Synthesia in a custom location?
By default, Skinbox will search for Program Files > Synthesia > Synthesia.exe
I suppose I'll add a small config file next time...till then you can try to copy Synthesia.exe there if the folder doesn't exist

Hi,
Thx for the v0.2 but unfortunately it asked me for location of synthesia and when i drop the skin folder it's say ok but i didn't see anything.
So i have installed Synthesia (previously i was using the standalone version) but now skinbox do not ask where Synthesia is installed even with a clean skin box unzipped.
Any advices?

EDIT
All is ok i haven't seen the synthesia slim edition EXE :p
By the way good skin better progress bar , the icons are great but not easy to understand XD
And falling notes are good!
Good Job.
Top

Without making your own personal skin there should be 3 different skins.
The normal skin, test skin, and the slim edition.
"And now for something completely different."
Top

hmm I suppose I'll upload some diagram later to explain what's supposed to happen, and some tips around the drop and graphics
glad you like it btw :]
Stuff & experiments for Synthesia: Gramp v0.2 • Skinbox • FireSynth • Video • Webradio
Top

I have found some by garageband (not shure if completly free for comercial use)
http://www.gettyicons.com/free-icon/ico ... icons-png/
"And now for something completely different."
Top

They definitely wouldn't be free for any use if they were from garageband
I think I saw those before, but they looked way too "fat" for my "slim" skin :p
I would rather go into that kind of style for example for neat icons
Decent instrument icons seem really hard to find, and that's probably why Nicholas had some made especially for Synthesia
I don't want to spend a huge amount of time of those things, so I had to think of some kinda "minimalist abstract constructivism"