Trouble with Synthesia, your keyboard, or adapter? Think you found a bug?
When describing problems, always mention your OS and game version (shown at the bottom of the title screen).

Hi. I recently bought synthesia but Im having trouble with latency. In other application (ableton, addictive key) I dont have much latency, but in synthesia its unplayable. Im using windows 7 64bit, Focusrite scarlett 2i2 and an Akai MPK61.

I tried to download http://coolsoft.altervista.org/en/virtualmidisynth, but it wont run on my system for some reason.

Hi,
Since you have a pro soundcard (focusrite you must set it up the driver of the focusrit. Check the buffer in the asio panel and you 'll have no latency whatever app you choose.
Top

Thanks for the reply. I dont quite understand what you mean. I have set my audio latency to 1 ms but its still slow in synthesia.
Top

I wonder if the CoolSoft synth won't run because of your pro gear. Hmm.

In any event, the answer is still "get a better synth". The built-in Windows synth doesn't use any of the fast (ASIO, etc.) audio paths that your Focusrite enables, so it's a matter of finding something else that does. There is another software synth (using nearly the same technology as VirtualMIDISynth) called BASSMIDI. That one might be worth a shot.
Top

normanbeats wrote:Thanks for the reply. I dont quite understand what you mean. I have set my audio latency to 1 ms but its still slow in synthesia.

Yup English is not my primary language.

I mean when you open synthesia open you're focusrite asio panel and check the latency.

I own a prodipe and i can set each latency for each programm maybe the focuriste one have the same function and by default it's on 512 or 1024.

You can also use an host like cubase so you 'll can set the latency from the host and you 'll need vsti plugins for a better sound...

Hey again and thanks for all replies.. Been quite busy lately.

I have the buffer set to 512, and I have almost no latency in ableton, or addictive keys, but its terrible in synthesia.
Top

Ah ok so 512 don't give 1ms latency.
A pro card plugged on usb have a latency of 3ms without crackle on the sound with a 128 buffer size so like Nicholas said Synthésia seem to bypass you're soundcard asio driver.

A screenshot of you're asio panel woud be great.

The buffer size doesnt seem to affect synthesia noticable. I dont know what u mean with "asio panel". Im using focusrites tool to change the buffer size, and it only has a slider for buffer nothing else.

Heres a screenshot of the settings in synthesia: http://imgur.com/a/Y9Iao
Top

Yeah, the "Microsoft GS Wavetable Synth" doesn't use any of the "fast path" technology that your sound card enables. It's always on the slow path.

You could use something like LoopBe1 or loopMIDI to send Synthesia's output to Ableton or some other app with a better synth.
Top

Hello so the "asio panel" is the focusrit software what size of buffer you use? (what position is the cursor on the focusrit panel)

For the Synthésia screenshot:
Yup it's better to avoid microsoft gs wavetable like Nicholas said.

Also i see an akai mpc plugged but not your keyboard.

Can you make a screenshot like if you want to play? (keyboard plugged and ouput input on Synthesia enabled for it.
Top


as in :
"The built-in Windows synth is slow and doesn't sound great.
...
1.Download VirtualMIDISynth from the CoolSoft site.
2. Download one of the recommended SoundFonts from the same page.
3. Install VirtualMIDISynth, then extract/install the SountFont someplace convenient.
4. Run the "Configure VirtualMIDISynth" start menu program, click the plus icon, find the .SF2 SoundFont file, then click OK.
5. On the "Advanced options" tab, lower the "Additional output buffer" setting as low as you can. Zero is fastest, but you might have to determine what's best for your system experimentally.
6.Once you've done that, you'll see a new output device on the Keyboard Setup screen in Synthesia named "CoolSoft VirtualMIDISynth". It should be much faster and sound better than the built-in Windows synth."
Top

ekanush wrote:I just don't have "Additional output buffer" as an option in the "Advanced options" tab of Synthsia...

You're looking for the Advanced options inside the Coolsoft synth system tray icon. 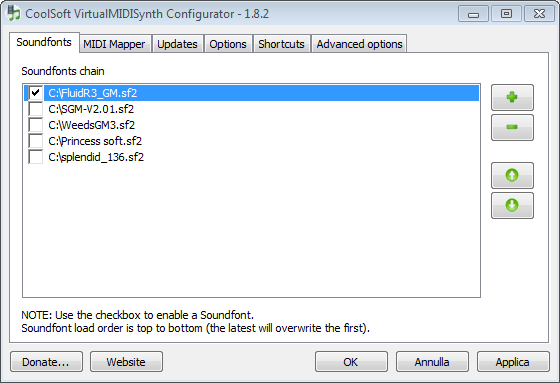 Im back 4 years later to give it a new try. Still never managed to use synthesia. I installed the midi synth someone suggested above and its still with horrible delay. Any suggestions?

In those four years, we actually had a chance to integrate the same BASSMIDI-based technology that VirtualMIDISynth uses, right into the Synthesia app itself. In the latest version, you should see a "Built-in MIDI Synthesizer" option in the list now, which should be as low-latency as VirtualMIDISynth (without any of the extra setup).

That said, it does still use WASAPI behind the scenes and not anything faster like ASIO.

1. Some testing I did in 2018 showed that a keyboard's built-in synth is always the fastest (often by an order of magnitude).

2. Piping Synthesia's output through a virtual loopback driver like LoopBe1 or loopMIDI into your favorite DAW (like Ableton) will let you use anything they've got (like ASIO) and take advantage of their lower latency.

There is a path to having Synthesia's new built-in synth work with ASIO. The same company that makes the BASSMIDI synth produces another plugin called BASSASIO which can detect and use ASIO if your system has it (like your Focusrite). I've been meaning to find a chance to check that out.

My other experiences with Un4seen's BASS software have been excellent with integration always taking much less effort than I expect, where everything just kind of works on the first try. With any luck we'll be able to get the faster ASIO support in there soon. (At the moment it's on line 226 of the list, so it should be here comparatively soon.)
Top
Post Reply
14 posts • Page 1 of 1

Return to “Help and Bug Reports”